Freedom from Fear, Freedom to Mosey, Inhaling Deeply, Taking Time to Just Be

Freedom to Look Up, Safe, Experiencing Awe and Feeling Gratitude, ‘Thank You God’ 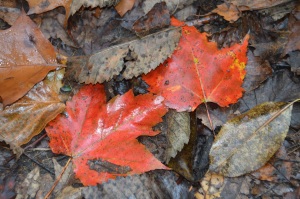 Freedom to Experience Life and Death in Natural Seasons and Rhythms

Freedom to Notice, Be Curious and Wonder, “What made those ridges in that rock”

Bittersweet Contemplating if Freedom could be Lost and Replaced with Fear

Going to school was tough for me but school work was easy. The structured atmosphere of school, the noise, the other kids bumping into me – I hated it but I loved learning then and I still love learning now. At the time, I didn’t understand the overwhelm I felt inside. Being a “good kid”, I kept it inside. I was lucky in one respect – seating was alphabetical and my last name started with a “Y” – so it was a blessing when I got to sit at the end of a row and in the back of the room. Better chance to watch everything going on and less chance of getting “touched” or “bumped”.

All of those experiences and feelings go hand-in-hand with a Highly Sensitive Personality – I now know there is nothing weird about me.  I remember day dreaming a lot in school, because real escape was not possible. I clearly remember my beloved notebook cover, a photograph of a misty morning over a horse pasture. I would dream myself into that picture and find relaxation and then be able to go on with the day.

That misty memory came back to me this morning as I walked outside. I felt a flood of relaxation, breathed deeply, sighed and realized that I’m now living my day dream from childhood. It’s funny when you actually live a dream … it’s not as perfect as you imagined it … there is hard work, repetitive chore drudgery, conflicts with various personalities that you’re bound to come in contact with … but then when you think about it, those things are everywhere and experienced by everyone – so you could be living out your life in a dead end unfulfilling situation or you could be living out your dream.

So I’m living in gratitude today, even through the small irritations. There are many blessings to be thankful for and it took a misty memory to remind me of that truth. 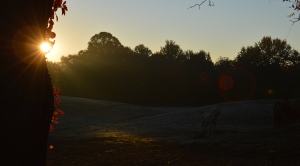 Me and Jimmy riding in the woods.

I practice what I preach and last week I took my horse to a saddle fitting clinic. The clinic was a fitting for both horse and rider.  In 2008 I had a large tumor (the doctor told my husband it was 6 pounds and the size of a basketball) removed from my left pelvis area and because of the physical changes in my body, it’s been difficult to ride in a regular saddle. For the past 7 years I’ve been riding in a treeless cushy saddle. In 2012 I tried to ride in a regular saddle at a Centered Riding clinic, the ride was only one hour and I thought I’d be fine but 5 months later I still had open saddle sores the size of quarters and ended up going to the dermatologist.

The treeless saddle worked well for both my round bodied Fjord and Paint horses but in 2013 I lost my Fjord to a colic incident and my Paint horse is in her 20’s and semi-retired except for therapy and an occasional short ride around the property. My new horse is an adopted Standardbred and he is tall and lean and the treeless saddle required multiple pads to stay off his spine and withers. I ride hills and trails, sometimes for 2 or 3 hours and was having to adjust pads too often, so I decided to invest in the Schleese saddle that is made especially for a woman’s anatomy.

This is a saddle that will work for both me and for Jimmy – a success! But to get to the saddle fitting clinic meant trailering Jimmy to the clinic barn.  I used to trailer quite often when I was showing horses, but for the past 20 years, I’ve been just happily riding trails around my own home and only using a horse trailer for emergency vet visits (not very often thankfully).

When you don’t do something often, you get out of practice. (And nervous too.) I was anxious driving with the horse trailer to the clinic and even more so when I missed my turn to the clinic location. I turned on the next road and it happened to be a narrow dirt road … panic is starting to rise … where am I going to turn around with my rig (truck and trailer) without going in a ditch or hitting someone’s mailbox … my heart is beating heavy and I’m filled with dread … not a good scenario. I turn in a driveway and s . l . o . w . l . y   start to back out, trying to stay on the driveway and road but the truck stops – OMG – I just jack-knifed the trailer into my husbands new “well-loved” truck.  I pulled forward and finally backed out and was on my way to a successful clinic.

The title of this post isn’t about the success of finally finding a regular saddle I can ride in – where the emphasis is on “hurray, I DID IT!”  Rather, it’s on the admission of guilt of having to tell my husband about the ‘accident’ and admit “I did it” …

I dented his bumper and scraped the beautiful metallic ruby red paint on his side panel. I did it. There was no one else to blame … it was my fault. Owning up to this and knowing how disappointed he would be was very hard. Disappointed in me for not problem solving the situation better when turning the horse trailer around and disappointed in the damage done to his new truck.

I braced myself and didn’t hide it, I allowed him to vent his disbelief without becoming defensive or personalizing it because I knew he’d have to get some emotion out.  And I know it’s better to just get emotions out before they stay trapped inside and a one-time situation turns into a broken record player, surfacing over and over in other situations. I was sorry for what happened and willing to get any repairs he felt compelled to get, part of taking responsibility is being willing to make reparation – to fix the situation as best as I could.

I’ll be honest, my husband did bring up his disbelief more than once, even days later, and I just agreed with him, yep, I can’t believe it happened either, I can’t believe I panicked like that, and I’m sorry I dented your truck.  I didn’t resent him bringing it up, because I really didn’t have to “fake” remorse and I didn’t internalize his emotion as meaning I was a ‘bad person’ – I don’t judge myself like that, so I’m not triggered by others emotions.  And even when bad things happen – accepting blame, asking for forgiveness, being willing to make reparation, and allowing another to feel their feelings, feels like a really good way to get through it and move forward with living life …